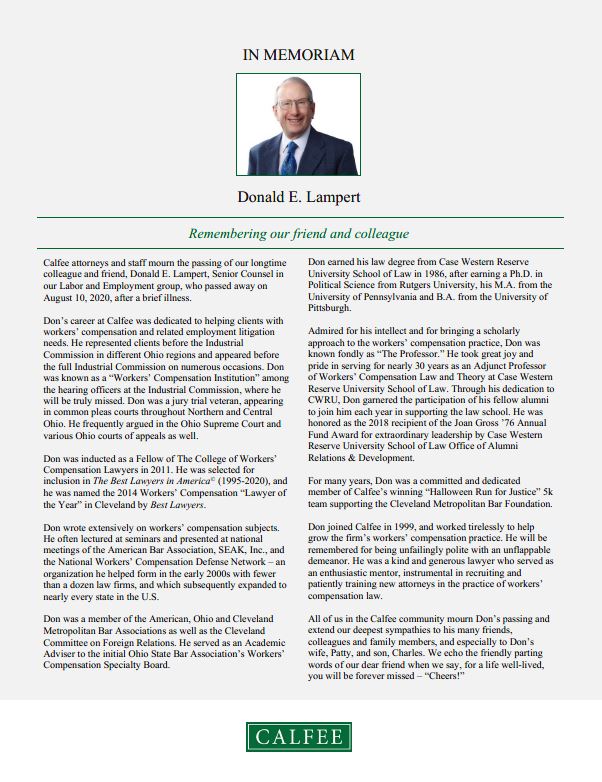 Remembering our friend and colleague

Calfee attorneys and staff mourn the passing of our longtime colleague and friend, Donald E. Lampert, Senior Counsel in our Labor and Employment group, who passed away on August 10, 2020, after a brief illness.

Don’s career at Calfee was dedicated to helping clients with workers’ compensation and related employment litigation needs. He represented clients before the Industrial Commission in different Ohio regions and appeared before the full Industrial Commission on numerous occasions. Don was known as a “Workers’ Compensation Institution” among the hearing officers at the Industrial Commission, where he will be truly missed. Don was a jury trial veteran, appearing in common pleas courts throughout Northern and Central Ohio. He frequently argued in the Ohio Supreme Court and various Ohio courts of appeals as well.

Don wrote extensively on workers’ compensation subjects. He often lectured at seminars and presented at national meetings of the American Bar Association, SEAK, Inc., and the National Workers’ Compensation Defense Network – an organization he helped form in the early 2000s with fewer than a dozen law firms, and which subsequently expanded to nearly every state in the U.S.

Don was a member of the American, Ohio and Cleveland Metropolitan Bar Associations as well as the Cleveland Committee on Foreign Relations. He served as an Academic Adviser to the initial Ohio State Bar Association’s Workers’ Compensation Specialty Board.

Admired for his intellect and for bringing a scholarly approach to the workers’ compensation practice, Don was known fondly as “The Professor.” He took great joy and pride in serving for nearly 30 years as an Adjunct Professor of Workers’ Compensation Law and Theory at Case Western Reserve University School of Law. Through his dedication to CWRU, Don garnered the participation of his fellow alumni to join him each year in supporting the law school. He was honored as the 2018 recipient of the Joan Gross ’76 Annual Fund Award for extraordinary leadership by Case Western Reserve University School of Law Office of Alumni Relations & Development.

For many years, Don was a committed and dedicated member of Calfee’s winning “Halloween Run for Justice” 5k team supporting the Cleveland Metropolitan Bar Foundation.

Don joined Calfee in 1999, and worked tirelessly to help grow the firm’s workers’ compensation practice. He will be remembered for being unfailingly polite with an unflappable demeanor. He was a kind and generous lawyer who served as an enthusiastic mentor, instrumental in recruiting and patiently training new attorneys in the practice of workers’ compensation law.

All of us in the Calfee community mourn Don’s passing and extend our deepest sympathies to his many friends, colleagues and family members, and especially to Don’s wife, Patty, and son, Charles. We echo the friendly parting words of our dear friend when we say, for a life well-lived, you will be forever missed – “Cheers!”