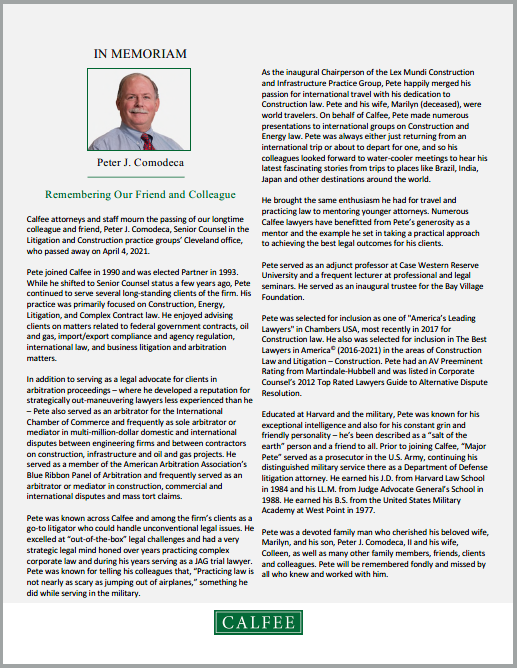 Remembering Our Friend and Colleague

Calfee attorneys and staff mourn the passing of our longtime colleague and friend, Peter J. Comodeca, Senior Counsel in the Litigation and Construction practice groups’ Cleveland office, who passed away on April 4, 2021.

Pete joined Calfee in 1990 and was elected Partner in 1993. While he shifted to Senior Counsel status a few years ago, Pete continued to serve several long-standing clients of the firm. His practice was primarily focused on Construction, Energy, Litigation, and Complex Contract law. He enjoyed advising clients on matters related to federal government contracts, oil and gas, import/export compliance and agency regulation, international law, and business litigation and arbitration matters.

In addition to serving as a legal advocate for clients in arbitration proceedings – where he developed a reputation for strategically out-maneuvering lawyers less experienced than he – Pete also served as an arbitrator for the International Chamber of Commerce and frequently as sole arbitrator or mediator in multi-million-dollar domestic and international disputes between engineering firms and between contractors on construction, infrastructure and oil and gas projects. He served as a member of the American Arbitration Association’s Blue Ribbon Panel of Arbitration and frequently served as an arbitrator or mediator in construction, commercial and international disputes and mass tort claims.

Pete was known across Calfee and among the firm’s clients as a go-to litigator who could handle unconventional legal issues. He excelled at “out-of-the-box” legal challenges and had a very strategic legal mind honed over years practicing complex corporate law and during his years serving as a JAG trial lawyer. Pete was known for telling his colleagues that, “Practicing law is not nearly as scary as jumping out of airplanes,” something he did while serving in the military.

As the inaugural Chairperson of the Lex Mundi Construction and Infrastructure Practice Group, Pete happily merged his passion for international travel with his dedication to Construction law. Pete and his wife, Marilyn (deceased), were world travelers. On behalf of Calfee, Pete made numerous presentations to international groups on Construction and Energy law. Pete was always either just returning from an international trip or about to depart for one, and so his colleagues looked forward to water-cooler meetings to hear his latest fascinating stories from trips to places like Brazil, India, Japan and other destinations around the world.

He brought the same enthusiasm he had for travel and practicing law to mentoring younger attorneys. Numerous Calfee lawyers have benefitted from Pete’s generosity as a mentor and the example he set in taking a practical approach to achieving the best legal outcomes for his clients.

Pete served as an adjunct professor at Case Western Reserve University and a frequent lecturer at professional and legal seminars. He served as an inaugural trustee for the Bay Village Foundation.

Pete was selected for inclusion as one of "America’s Leading Lawyers" in Chambers USA, most recently in 2017 for Construction law. He also was selected for inclusion in The Best Lawyers in America© (2016-2021) in the areas of Construction Law and Litigation – Construction. Pete had an AV Preeminent Rating from Martindale-Hubbell and was listed in Corporate Counsel’s 2012 Top Rated Lawyers Guide to Alternative Dispute Resolution.

Educated at Harvard and the military, Pete was known for his exceptional intelligence and also for his constant grin and friendly personality – he’s been described as a “salt of the earth” person and a friend to all. Prior to joining Calfee, “Major Pete” served as a prosecutor in the U.S. Army, continuing his distinguished military service there as a Department of Defense litigation attorney. He earned his J.D. from Harvard Law School in 1984 and his LL.M. from Judge Advocate General’s School in 1988. He earned his B.S. from the United States Military Academy at West Point in 1977.

Pete was a devoted family man who cherished his beloved wife, Marilyn, and his son, Peter J. Comodeca, II and his wife, Colleen, as well as many other family members, friends, clients and colleagues. Pete will be remembered fondly and missed by all who knew and worked with him.